Storm Drain Stencils: Only Rain Down the Drain STORM DRAIN STENCILS: ONLY RAIN DOWN THE DRAIN

Everyone has seen roadside storm drains, but you may not know their true function. These channels ensure that populated areas don’t flood after significant rain, ice or snow storms. By diverting excess liquid into natural bodies of water, like streams and rivers, storm drains keep roads, building foundations, and your feet relatively dry. Serious problems arise, however, when people misuse them. Although many storm drains include sediment systems that are designed to catch large debris, most fail to halt the passage of harmful pollutants. When these drains are used as dumping grounds, untreated contaminants get washed right into rivers and streams. Such pollutants include:

These contaminants ultimately flow into oceans. Along the way, they kill marine plants and animals, and cause unhealthy algal blooms. At risk wildlife species that aren’t equipped to cope with toxic exposure may sustain mutations and other multi-generational effects that compromise their survival. This can permanently throw food chains off balance. When storm drain, pollutants contaminate potable water sources, they can increase the cost and environmental impact of water treatment. If they clog drainage networks in shared sewage systems, they may result in human waste getting backed up and washing into the water supply. Although most of us pass storm drains without a second thought, they’re a direct link to some of the most important natural resources we have, and they deserve our protection.

WHAT IS STORM DRAIN STENCILING? 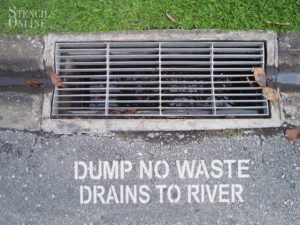 Storm drain stenciling is the act of labeling storm drains using alphabet stencils. These highly visible graphics include messages and imagery that tell passerby they shouldn’t dump waste into storm drains. By reminding people that whatever they toss into storm drains will end up in the rivers, streams, lakes, and oceans they depend on, stencils can act as major deterrents to pollution. According to the U.S. Environmental Protection Agency, storm drain stenciling is an effective method of public education and outreach for helping control waterway pollution.

DOES STENCILING WORK TO PROMOTE ENVIRONMENT PROTECTION IN YOUR STATE?

Storm drain stenciling is practiced successfully all over the country. In New England, the Estuaries Project conducted detailed research on a dozen storm drain stenciling projects that took place in seven of the state’s coastal communities, and involved more than 600 local volunteers. Over the course of 700 hours, these individuals stenciled some 1,330 sewer grates. Participation was notably high among youths and community service groups. This study demonstrated that stenciling projects were better at increasing waterway pollution awareness than television ads, mailers, or even word of mouth. The New Hampshire Department of Environmental Services also points to the success of initiatives in the Dearborn Brook Watershed. Families, schools, and businesses banded together to stencil storm drains and place door hangers that educated people about the importance of not dumping.

HOW CAN I GET INVOLVED? Thinking about labeling your local storm drains? It’ll be hard work, but your actions could help preserve the environment for future generations. Storm drain stenciling is an important practice that lets communities take active roles in protecting the natural resources that sustain us all. Running a storm drain stenciling program is an important responsibility. Volunteers and other participants should be provided with durable storm drain stencils, and accurate maps that indicate the locations of drains needing marking. Stencils can be painted using brushes or sprayable striping paint. Some research indicates that while sprayable paints are faster, brush paints may last longer.

Participants should be split into small teams, and young students should always be supervised by adults. Dividing labor makes it easier to cover larger territories with storm drain stencils. At a bare minimum, teams should consist of people to perform the following tasks:

Painting
Cleaning existing trash and debris from around storm drains,
Watching for traffic
Keeping track of which drains have been stenciled
Hanging door hangers or flyers.

It’s also a good idea to equip stencilers with high-visibility safety vests and road cones. To boost awareness of your program, try publicizing it through local news agencies and volunteer organizations. Letting communities know that you’ll be in the area makes it easier to stay safe and gain local support.

Does improving your neighborhood by stenciling storm drains sound like a worthwhile cause? Contact your local government officials for information on accepted environment protection practices, as well as areas that require the most attention. You may also need to request permission to get started or use community resources, like schools and other public meeting places. Visit Stencils Online for durable storm drain stencils that make it easier to move your project forward and make an environmental difference in your community.

Custom Stencils: Not just for walls

CUSTOM STENCILS: NOT JUST FOR WALLS Did you know all the creative ways you can use custom stencils from Stencils Online? Read on... read more

STENCILS ONLINE & TOYS FOR TOTS As the year comes to a close we would like to thank all of our... read more

Why Should Your Business Use Pavement Chalk Advertising?

WHY SHOULD YOUR BUSINESS USE PAVEMENT CHALK ADVERTISING? Since Jay Conrad coined the term in 1984, ‘guerrilla marketing’ has been an... read more

Personalize Your Living Space With These Great DIY Stencil Projects

PERSONALIZE YOUR LIVING SPACE WITH THESE GREAT DIY STENCIL PROJECTS Do you have blank walls, curtains, or floors that are begging... read more

How Technology Is Changing How We Park

HOW TECHNOLOGY IS CHANGING HOW WE PARK Time for some brutal honesty: parking is an absolute mess. Not just when you... read more

10 Ways You Would Never Expect to Use Stencils

10 WAYS YOU WOULD NEVER EXPECT TO USE STENCILS In the not too distant past, when people thought of stenciling, most... read more

4 Green Initiatives Taking the US by Storm

4 GREEN INITIATIVES TAKING THE US BY STORM The Federal Government may have a spotty record when it comes to green... read more